“I was never afraid to fail or to push my limits because I always came home to love.”  Tiger Woods

These words spoken by Tiger framed my experience today at the Senior Women’s U.S. Open Qualifier. I did not qualify. Two bad holes cost me several shots and a qualifying spot.  It was a hard but glorious day.

First, about hard:  I have been working diligently on my swing changes over the last four months to eliminate an extra move that causes me to be inconsistent.  The proof of making such a change only comes under pressure.  Can you perform the shot under pressure?  Today, the answer is: not yet.  While I hit many great shots, the several errant shots cost me dearly—which is what I have been trying to eliminate.

I played with Jackie Gallagher, at 17 year LPGA tour veteran.  She was much younger than I. While we hit the ball the same distance, which made me proud, she was much more consistent in her swing.  She made the cut while I did not.

On the practice green in the morning, I made just about every putt from every distance. It was remarkable. The greens on the course, however, were very different—slower and the grass not as slick.  I had a few too many 3 putts, something I normally do not have.  So there you have it.

The hardest part was putting a full focus on achieving this goal over the last four months. Because the tournament is in Pinehurst, where I lived for six years, and is going to be on the course where I took Mom to play her first round of golf at 85, it would be especially meaningful for me to go. It would be a “full circle” kind of event. But real in my dream did not turn out to be real in my experience.

Now, for glorious:  I am always seeking to know what it means to live in the Kingdom of God.  This experience was a different kind of expression of the Kingdom, perhaps the most poignant and vivid.  Yesterday, I was not planning on playing a practice round, but connected with my friend, Carole, who is a sister in the Lord and fellow competitor, not to mention wonderful Caddy Club member! We met in a thunderstorm during the Tennessee Women’s Open about 15 years ago.  The entire field was sequestered in the golf shop for three days of off and on thunderstorms.  We became life-long friends in that thunderstorm. 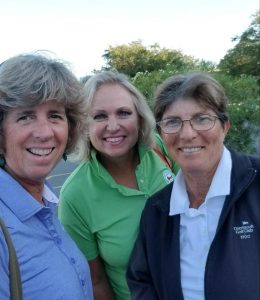 I decided to play nine holes with Carole. When we got in, I saw Meredith, my competition partner who is also a fellow believer.  The timing was right for the three of us to connect and go to dinner.  It was a spontaneous moment. We enjoyed a marvelous Mediterranean meal with great fellowship.  It became obvious to me that just as important as the competition was the experience of true friendship. The exchange was beautiful.

Today on the first tee, I saw Carole standing on the sidelines cheering me on as I teed off. On the course, my playing partner, Jackie and I enjoyed one another’s company immensely.  She, too, is a fellow believer.  Her eleven year old son, Sully, caddied for the first time. My caddy and new friend, Jerry, was spectacular in his outstanding service, encouragement, and friendship. He insisted on treating everybody to lunch afterwards.  His generosity and heart-felt engagement in my game was touching.  His wife, Sally, also joined us. 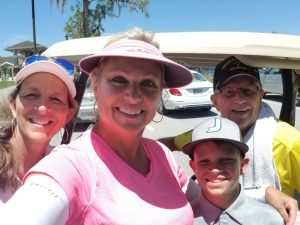 I share all this to emphasize my initial quote from Tiger Woods.  God wanted me to be surrounded by love in the midst of my defeat. He wanted me to know, again, that defeat is swallowed up in love.  To so dedicate my mind, body, and spirit to a goal which I did not achieve and be immersed in the love of God throughout via true friendship, was a notable experience in the Kingdom—as well as a pronounced descriptive of what the Kingdom of God is all about:  friendships!

Now for the best part and what you can learn from this, too:  The culmination of my experience took place after lunch which had to do with emotionally processing and completing a competition expeditiously.

While sitting at lunch, surrounded by friends, I felt free to let the tears of “performance letdown” flow.  When you are fully engaged in a competition and experience defeat, you have to express the emotions.  To do so in the presence of love and acceptance is the best place to “let it go.”  I allowed myself to feel the full brunt of the disappointment and defeat.  I always say, “Emotions have to be completed—fully released—in order to go on to the next competition.”  The laughter and banter around the table helped  buoy me up.

Here’s the supernatural aspect of processing a competition:  While I was sitting and waiting for the full results to come in, I received a text from one of my Caddy Club Members #8, asking me how I did. When I told him, he responded with, “Your best days are ahead of you.”  He preceded it with “Flight taking off.” I thought at first he was saying, “You’re taking flight, Veronica.”  I didn’t realize he was talking about his getting on a plane!  But too late! I took it to mean, “I’m taking off—and my best days are ahead of me.”  It was just enough of a perspective shift to get me jolted out of my emotional rift because it made me think FORWARD AND FUTURE in the MIDST of all the feelings of my defeat.

It reminded me of Mary at the tomb of Jesus.  As she was crying, peering into the tomb, she was looking for the live amongst the dead. Jesus was no longer in the tomb!  All of a sudden, He appears to her as the gardener, behind her, and asks her, “Why are you crying? For whom are you looking?”  She was looking for Jesus, thinking that somebody had taken him away.  Then He calls her name, “Mary!”  She recognizes him as Jesus and her entire emotional state changes in an instant!  In order for her to go from crying to rejoicing, she had to have a change of perspective. She had to turn her head from looking in the tomb to looking up and turning around.

That’s what was beginning to happen to me in the text sent to me.  Here was my thought process after my round before the comment in my friend’s text pinged my perspective:  “It is going to take several days to process this. I think I am going to take some time off. This is too hard and I am not seeing the fruit of my hard work.  If I spend some time at the ocean, if I am all teared up, at least people will think I was in the water! Boo hoo hoo!”

When I got into my car, I immediately called my performance coach and long-time friend, Jon, who took my perspective change to an entirely new level and full completion.

Please take note of the steps Jon used me with as a Master Coach.  If any of you have children, or even employees, trust me, this is the most empowering thing you can do for someone engaged in achieving a goal who falls short.

“Veronica, I am so proud of you!  You did your very best. You entered the competition—you competed!”

He affirmed my worth totally separate from my score (1)

He validated and elevated my identity. (2)

“Veronica, you are a pro golfer.  Do you know what pro golfers do? Pro golfers compete in tournaments.  You love to compete, right?”

I said to myself, “I am a lot of things other than a pro golfer.  I think of myself as a pro golfer somewhere down the list, but okay.”   “Yes, Jon, I do love to compete.”

He immediately directed me forward and literally inserted me into my future, compelling me to TAKE ACTION.”  (3)

“Then go find another tournament to compete in.”

“Well, I signed up for the US Open Qualifier, but that’s the grueling one.  36 holes in one day.  I was only going to play in that to be a preparation for the Senior US Open. Now that I did not make it, I was thinking of withdrawing from that tournament. Should I still compete in it?”

“What do I have to do, put my shoe through the phone?”

I BURST OUT LAUGHING.  At that precise moment, all the disappointment and let down IMMEDIATELY BROKE OFF OF ME.  I have absolutely no disempowering emotions still in me. They are completely gone! Halleluiah!

In speaking the TRUTH IN LOVE to me, in the space of less than 5 minutes, Jon helped me see my performance as NOT AN SINGULAR EVENT, but A CONTINUUM, an expression of WHO I AM and WHAT I LOVE TO DO.  BOOM!  It was SO POWERFUL.  So I guess I am taking flight.  Flapping my wings again for no other reason than I love to compete and I love to win, even if it is over a spirit of defeat. This was not my intention to have this sort of win, but who knows?  Maybe for right now, I need to affirm that I may be more like Tiger Woods than I thought.

It is true:  I am not afraid to fail or to push my limits because today, I came home to love. And in that knowledge, I can rest and be comforted.  Thank you to each of you who have played a part in my journey into competition and into the Kingdom.  This time I learned the Kingdom is about true friendships. 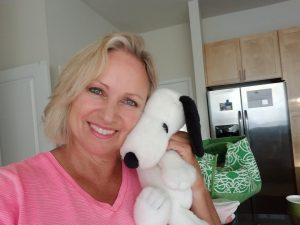 If you are interested in learning more about love-based performance coaching, please check out my program at:   jointhechampionsway.com.