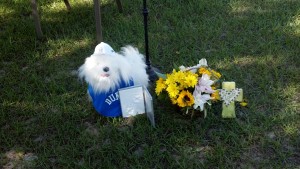 One of the things I enjoyed most about the U.S. Opens was all the people I met.  It was great to strike up a conversation with a total stranger and have it be totally appropriate because we were all talking the same language surrounding the same story.  Hey, I even learned a brand new vocabulary word while shooting the breeze with a lady on the back of the eighth tee.

“This is such a great place to stand,” she said. “The shade makes the heat bearable and the zephyrs are quite consistent.”  “What’s a zephyr?”  I asked.  “A zephyr is an unexpected cool breeze on a hot day.”  Just as she was talking, one blew through lifting the burden of high heat off my sweaty brow.  The truth is, if you are going to have to endure a hot day, you might as well do it under some shade in the line of the zephyrs.

The same is true for breezing through a tough loss.  After I made it through the Opens hit with the loss of my beloved doggie, Teddy-boy, during tournament week, I decided that what I needed most was a few zephyrs.  If you want to experience a cool breeze on a hot day, the first thing you have to do is know where the breezes are and then position yourself in the line of them.  If it works on a parched brown fairway, it will also work in the parched spots in your home where your beloved doggie used to sit, eat, or sleep.

My neighbors Carol and Pat gave me a beautiful yellow carnation.  Every time I looked at a spot where he used to be, instead of grieving over an empty space, I put the carnation on that spot.  Wouldn’t you know that I felt a little zephyr blow through and keep my heart in an uplifted place since the space is filled with a symbol of a fond memory instead of a stinging loss.

I have also learned that you can create a big zephyr, too, some with unexpected forces.  One morning it was so strongly impressed upon me that I needed to conduct a memorial service for my dog.  The thought came to me, “His presence in my life was so impactful.  He was like a person.  I sure would memorialize a person. Why not a dog? It is only fitting.”  Not sure what that would look like, I decided to take some first steps in the creative process.  It will be outside in my courtyard.  Since a lot of my neighbors loved the dog, too, I would invite them all to come over.  Instead of calling it a service, I would call it “Teddy’s Memorial Tribute.”

Last Sunday at 6 pm, about twenty-five people showed up.  I spoke about the life and times of Teddy-boy.  Then I had a “taste and see” segment where I had people experience all the things that showed what he liked.  For instance, since tuna fish was his favorite food, I put a spoonful of tuna on a cracker for everyone.  We held up the cracker and said in unison, “To Teddy!” and then we all partook together.  It wasn’t communion, but it sure felt like it!  Since he was totally white, I put a marshmallow on a toothpick and passed them around.  “To Teddy!”  Then instead of playing “Simon Says,” we played “Teddy says” with all the words to which he would respond.  The tribute ended with my giving an inspirational message on the difference between resource love and source love.  As much as dogs represent unconditional love, there is still a more causal love, the love of God .  Whenever a group of us would hold hands in prayer, Teddy-Boy would come into the circle and kiss each of our hands. It was only fitting to close in prayer with everyone holding hands. Creating a fitting tribute for my beloved dog was a powerful zephyr, but there was still a stronger one that came blowing through.

A few years ago, I co-created an indoor nine hole putting course, so I took several of the holes and arranged them in the courtyard for the very first Teddy Boy Dog Bone Open.  Most of the folks had left by now, except for the immediate neighbors.  My new neighbor, Raheem Washington was bugging me to give him a few pointers about golf, so we declared “Let the games begin!” and off we went into a fierce competition.

When the competition was over, Raheem, a tall basketball player-like Afro-American young man was tied with the effervescent ninety-six year old Miss Libby Deahl.  It was the first major championship for both of them.  The spirit of competition rivaled that of the pros in the Open and when both Raheem and Miss Libby scored a hole in one on the second play-off hole, the big zephyrs came blowing through!

After the fifth playoff hole, the twenty-something new dad won out over the elderly but buoyant grandmother.  “This is so emotional, scoring my first win,” Raheem played it up, as he held the big dog bone over his head in victory.  We laughed hysterically over the play, banter, and spontaneous spirit of joy that erupted right in the middle of my courtyard.

What I learned from Teddy’s Tribute is that there is a more powerful emotion than grief.  It is joy.  Champions are those who can replace a disempowering emotion with an empowering emotion at will.  . You can create joy intentionally if you will just allow the spirit of a champion to arise in you as it did with us right in the middle of my loss.  To Teddy!