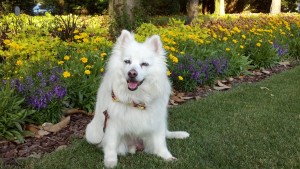 The U.S. Women’s Open went off without a hitch.  The sun and crowds came out. Our anticipated favorite, Michele Wie, won to our delight.  I wish I could say the same for my own world as I was hit with an unexpected blow right in the middle of the tournament.

Wednesday afternoon I picked up my dog from my neighbor’s house and noticed he was acting kind of strange.  Not wanting to miss my favorite beach music band, The Band of Oz, I quickly fed him and sped off to Southern Pines. Since dance and worry don’t make a good mix, I stayed for just about an hour then came home.  Later, I went to give him his last potty break for the evening. As I reached for his collar, without any advanced notice, he turned around and feverously bit me.

Three trips to the vet and a day and a half later, on Friday at 3 pm, I had to put down my beloved American Eskimo Spitz, Teddy-boy. It was one of the hardest things I’ve ever had to do.  He fought a valiant fight against that dreaded disease of diabetes.  At fourteen years old, a bacterial infection complicated his already weakened state and when he quit eating, he quickly debilitated beyond hope for recovery.

Death, loss, grief and two more days at the U.S. Open.  You wouldn’t think those unlikely dynamics would make good playing partners, but somewhere in the heart of Providence, they did.  As a performance coach, I am always thinking about how to accelerate progress in people’s lives.  I knew going to the Opens for two more days would tremendously help to keep my mental focus outward.

Emotionally, I decided not to keep silent about my grief, but share it.  I kept my Facebook family apprised of what was going on, and the expressions of empathy came pouring into my empty cup.  When I struck up a conversation with strangers on the course, I would say, “Sorry for the bags under my eyes, but I just had to put my dog down.”  Without exception, the reply would be, “Oh, I am so sorry!”  Hugs followed words expressed with a total identification of my loss over and over again.  I never knew the force of empathy and identification of loss would provide so much comfort, but they did.  The lift was immediate, powerful, and sustained, a stinger shot of love that kept hitting my heart over and over again. It was a shot more impressive than any of Wie’s 300 yard stingers down #2’s fairways.

Saturday night I attended the Carolina Philharmonic.  The stinger shots of love continued as the power of fresh symphonic sound beat upon my hurting soul. I discovered the healing power of sound as I enjoyed the evening and was met with even more empathy from others.

Walking to the media tent on Sunday morning, I passed someone with whom I struck up a conversation.  After handing him one of my champion mindset cards with Teddy’s picture on it, I was hit again with a love stinger, this time from within.  I realized that I was doing the same thing without him that I did with him—reaching out to strangers and making fresh connections with joy.  When Mom died, I retreated.  This time I kept moving forward without skipping a beat.  It reminded me of experiencing a double bogie on the course.  Instead of giving up inside or getting mad, and carrying the disempowering emotion to the next shot, I let it go.  It was a profound moment of real victory for me as I understood the power of processing grief in relationship with others which enabled me to keep moving forward right in the middle of my loss.

The love stingers continued.  A few minutes later I heard someone behind me say, “It looks like it is going to rain.”  “It’s going to be sunny!” I blurted out.  Turning around to see with whom I was speaking, I said, “I know you!”  “Veronica!” the lady exclaimed.  “Mary Ann!”  Walking right behind we was my college golf teammate from Duke whom I have not seen in 35 years! Joy erupted as we exchanged stories of one another.

The most profound shot of love came at the end of the tournament.  Wanting to get to the other side of the fairway near the 18th green, I was ticked off that the rope was closed and I could not get to the grandstand in time to see Wie’s final shot.  I noticed about thirty state troopers standing across from me all decked out in their big hats and holsters.  The sight was truly intimidating.

When we were finally able to cross the fairway, the biggest state trooper came towards me, “Mam,” he said soberly.  “What did I do wrong?” I thought.  “Am I going to be arrested for crossing the fairway?”  “Mam,” he said again, “I understand from one of my colleagues that you had to put your dog down.  Mam, I’m a big dog person.”  “You sure are!” I thought as I gazed up at him. “Mam, I want you to know I’m real sorry for your loss and that I care.”  Then he hugged me.  I just about lost it, as his words touched me deeply. From someone whom I expected punishment, I received compassion.  Somewhere in that figure of authority image, I sensed The Big Daddy himself sending me his shot of love from above.

As I turned around to see Michele Wie holding up her trophy, I couldn’t help but think there were a whole lot more champions out there accompanying her.  All the people who arrested me with their love stingers and filled the hole in my heart with their care and compassion were real winners, too, sending this little girl at heart home in true victory right in the middle of her loss. Thank you Pinehurst!