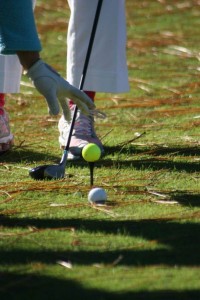 Recently I took on a new young golfer who wanted to uplevel his play on the high school golf team.  He came to me shooting 122.  After the first lesson, he shot 115, and then a sparkling 47 on 9 holes.  His next match was back up to 125.  Something was wrong.  He was making great progress in his lessons, improving his swing and short game. There was no reason to score high again.  The answer was clearly not in the physical realm. It had to be psychological.  He was shooting 125 because he had no internal limits to shoot less.  In other words, he was not “owning his own game” enough to tell himself, “these kinds of scores are no longer acceptable.”  He was not setting internal limits on his performance and demanding a better game of himself–and doing the work to achieve it.

As I was driving home thinking about a champion’s mentality—the resolve to own your own game and call yourself up higher,” I heard an internal voice say to me, “That applies to you, too, Veronica. There are areas of your life where you are shooting 125–putting you in default mode, causing you to just survive because you are not setting limits on a low performance life–and not calling yourself up higher.  It’s time to own your life, make the changes, and and resolve that certain things are “just not acceptable anymore.”  This realization hit me in the gut hard.  Yep, you and I are responsible for our own scoring, which means the results we are getting are not a result of shots that just happened to go bad, but thinking which produced the shots in the first place.

Hit with this conviction, I am taking out 3 days to get away, to fast and pray, to make some clear decisions about saying goodbye to a 125 life FOREVER.  Now if my student only had the ability to shoot 125, that is a different story, but he clearly had the ability to score lower–that’s why staying stuck in a comfort zone is not acceptable.  Staying in the comfort zone of a 125 life is not acceptable because you and I CAN do better.  Equipped with a resolve and some reflection on better thinking, a higher expectation, and the belief that we can do better, we will. It begins with answering the question, “What am I no longer willing to tolerate?”