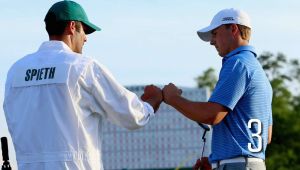 My first memory of life occurred when I was three years old on a Saturday afternoon with my dad.  We were staked out on my brother’s bed, tuned into our little black and white television.  Perhaps a better word would be “glued” to the t.v. as the indomitable Arnold Palmer charged up the 18th fairway winning yet another victory to expand his kingdom.  When it wasn’t Arnold, it was Jack staking his claim to  championship territory.  While most little girls were playing with dolls, I was at Daddy’s side absorbing his love for the game and enjoying watching the world’s greatest players seize the prize.

With decades of observing the greats of old as a weekly tradition, and rubbing shoulders with them from time to time, it is no wonder I found myself comparing the new young Master’s champion, Jordan Spieth, to those who have gone on before. As my eyes once again were glued to the television for an entire weekend, I couldn’t help but compare Spieth to Nicklaus.  The two could pass for twins when it comes to similarity of style and the unique factors behind their success.

In terms of the way they play the game, both are strategic thinkers, methodical and along the serious side in their natures. Jack was all about course management and his thinking about how he played his shots.  Ditto Jordan.  While you might argue that Tiger Woods is also a strategic thinker, he is, but in a very different way.  His thinking is much more aggressive and a lot of the time, outside of himself in his fighting style.  Woods’ energy is very forceful and physical.  Both Nicklaus and Speith vent their energy verbally.  They also are very ritualistic in the set-up of each of their shots, meticulous to the bone.

At last year’s U.S. Open I had the opportunity to get inside the ropes to watch the players.  As a performance coach, I am a trained observer and watched each one like a hawk.  When I saw Jordan, he stood out like a like a lone cat in a line of German Shepherds.  There was something about his quiet demeanor, the way he carried himself as champion, and his utmost confidence in himself.  His level of focus was off the charts, and I thought to myself, “Who is this good-looking young guy who conveys the air of an Open champion even in his walk?”  (I have to admit, I also said to myself, “Wow!  Too bad I am not a thousand years younger!  He’s so cute!)  Both Nicklaus and Spieth exude a similar air of a champion who refuses to think about himself as anything less than one–ever—even in a casual walk around the clubhouse.  Their mindset is sealed to dwell forever in the champion zone.

Perhaps the greatest similarity between the two champions is their upbringing. While most people don’t link home life and friendships as causal factors to championship performance, deep trusted relationships are primal to long-term success.  Nicklaus had a very holistic upbringing, playing numerous sports, and was grounded in a solid, intact, family life.  Jack Grout was his teacher since he was a young boy.  The consistent encouragement and friendship that Grout offered Nicklaus through the years had both a pillow and launching pad effect on the champion.  I know this first hand.

One day I was on the driving range watching Nicklaus hit balls with Grout’s eye upon his every shot.  The intensity of Nicklaus’ focus on the range was no less than it was under pressure.  Hitting one irons, each ball shot forth like a torpedo to a tree way down the range. Nicklaus never looked at his target. His eyes were riveted on a spot a foot in-front of the ball.  “Great shot, Jack!”  Grout said to Nicklaus. Jack hit another shot followed by another shot of empowerment from Grout, “Jack, you’re the greatest!”  Grout built Jack up after each shot.  I felt like I was watching a song and a dance routine between the two of them.

While Spieth obviously looked at his targets, they were small ones.  His head was down a lot, focusing deeply on what was right before him.  He chose his caddy because of his powers of encouragement and friendship.  Like Nicklaus, Jordan too, has a grounded home life, a special needs sister whom he is deeply inspired by, and a long term teacher he had since he was an emerging teenager. There is something to be said about the relational dynamics of having the kind of support around you that breeds stability, nurture, and emotional security so that you are free to look outward and soar.  Because I never had that, it is so glaringly obvious to me the power of nurture to one’s success when I see it. Spieth himself credits his family and team as the most important factors in his rise to the top.

Whether Spieth will ever equal or surpass Nicklaus’ record has yet to be seen.  From the eye of this beholder, however, there’s no telling how many more decades this golf chic will be glued to the television screen, engaged in her father’s favorite past-time, cheering on a new generation champion who has already demonstrated the traits of unstoppable success.