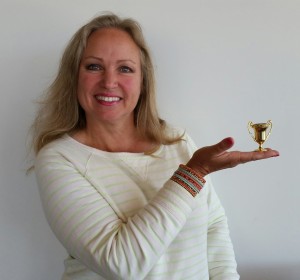 I have always been fascinated by the spiritual side of performance.  While most people think that a competition is simply on a mental-physical plane, we are in reality four-part beings.  This past week I had the chance to experience the emotional-spiritual side of a championship. In this case, it was in the internal completion of a championship that happened almost 40 years ago.  I had no idea there was still something to be completed until I returned to my hometown where I lost my first major championship to the 7th ranked amateur in the United States, and some say it was done in an underhanded way by her.

I was a teenager at the time who had a fiery competitive spirit, but the West Penn Amateur was the most prestigious tournament in Western Pennsylvania at the time.  I had just beaten my biggest rival in junior golf in the semi-finals and now I had to face Judy Oliver III for the championship.  Yep, you heard me right.  The third.  She was the jet-set millionaire type that had everything and I was the pip-squeak who grew up on the other side of the tracks, until the back nine of the competition.

I was 1 up on her on the 14th hole.  She hit her drive out of bounds.  I hit mine slightly in the rough.  Then I hit a freaky shot out of bounds.  We both had a horrendous hole after playing great golf.  She accused me three times of having a higher score than I did when we reached the hole.  I was so afraid, being in the pressure of the moment, that I did not know how to respond, so I thought, “She must know what she is talking about. She is more experienced than I am.”  So I agreed, and conceded the hole.  Only problem was, she was wrong.  We were both on in the same number of strokes, but I gave away the hole because I listened to my opponent’s adamant voice, and ended up losing the tournament by a narrow margin.

The loss was traumatic, as I did not have anyone to help me process the intensity of a fully engaged heart, mind, and body in my competition.  When I got home, I was hoping my mom would console me. She was listening to the radio broadcast the tournament shot by shot and she was more devastated than I was. I ended up consoling her.  The next year I had totally forgotten to enter the tournament, as I psychologically blocked the whole competition out from my mind.

It took me years to process what had happened, and although I never though she had an evil intent in her actions, a lot of people did.  I always admired her, however, and was a bit envious that she had so many more advantages than I did.

When I went to my hometown to play in the U.S. Open Qualifier this past week, I had the chance to reminisce with a lot of people about my upbringing in golf and the people in it.  I asked my friend, Bob Ford, “How is Judy Oliver doing?”  He responded, “Not very well. She died about 12 years ago of cancer at age 54.”  I was stunned and saddened.  Then all of a sudden I also had another thought come to mind, “In the big picture of things, the playing field had been leveled.  I scored a win in the game of life in that I was still living.  I now have an opportunity she won’t ever have and that is I am alive—I am alive to play championship golf age an age that she never will.”  In that moment, I felt something deep inside me have a sense of full closure.  The book was now closed on a devastating first championship experience and how it laid the foundation for my competitive trajectory for years to come.  I didn’t even know there was still something there meant to be brought to closure, but I felt it deep within.  There was no longer a need to even think about that story because I was granted a win in life that surpassed my competitive loss.  I could go on, now fully cleared of that experience, and in a sense be restored to “competitive innocence.”

None of this was conscience to me until I heard of her loss.  Being an emotionally and spiritually aware person, I was saddened for her loss, stunned at the effect that experience still had deep within, and deeply grateful for the sense of closure and new perspective I gained to start a new era of play now from a fresh sense of advantage in my life.  I will always admire Judy Oliver for her life and legacy, and now I can get on with my own in a new way.

All competitions have to be emotionally completed or that energy will stay within you until you deal with it.  If I can help you in your competitive journey, please reach out to me at: veronica@truechampioncoaching.com.