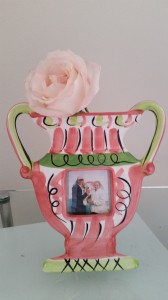 I love trophies. As symbols of accomplishment, I have enjoyed collecting, preserving, and letting go of my golf trophies over the years.  It has been interesting for me to see how people value, display, and even define the meaning behind their trophies.

The other day I was watching a television show that highlighted Arnold Palmer. They showed his office with every trophy and award he has ever won filling his walls like well-worn wallpaper.  He had a case off all his golf balls of the championships he won.  Each time he would win a major, he would create another empty space in anticipation for his next championship ball to find a home.  What a great mindset.

I have a friend who has a display of her husband’s eight hole- in-ones decorating the staircase to her second floor. Each golf ball trophy was nicely encased with the sacred scorecard of the course the miracle drop took place.

Over the years, I have come to realize there are different kinds of trophies to represent different kinds of victories. After I spent seven years care-taking my elderly mother whose birthday I just honored in memorial yesterday, September 13th, my friend Pam called me up.  “Veronica, I have something for you.  I found it about six months ago and it reminded me of you.”  It was a copper-looking trophy in the form of an elegant woman “all dressed up with somewhere to go” decked out in historic golf attire. This one represented a victory of a different sort.

Pam’s timing of giving me that trophy meant a job well done in seeing Mom through to the finish line and helping her to blossom while she was literally dying. I mean, who starts to play golf at 85 when you have just been given six months to live with at terminal heart condition?  Mom!  Who got so connected to her athletic wiring that she found her true self and lived almost seven more years, outlasting the very operation that would have extended her life?  Mom!  Who had her first tournament at 90, The Grandma Open, winning it by one stellar shot?  Mom!  Who inspired Peggy Kirk Bell as a fellow generational colleague to have faith all the way to the finish line?  Mom!

Recently, my beloved doggie, Teddy-boy, passed away during the Women’s U.S. Open. I decided to conduct a memorial tribute in his memory since so many people loved him.  I looked for days for a specific picture I had of him with Mom and me when he was just a young pup on the Virginia Beach boardwalk.  I could not find it anywhere.  Then all of a sudden one day my eye caught the picture in a cute trophy I had on display that also served as a vase for a singular flower.  There within the flower bloom trophy was the mystery picture!  Then a more inspired thought occurred to me:  I have never put a picture in my “bloom trophy” before.  Could it be that the picture was hidden from me so that I could find it in a moment when I could interpret the trophy as a “thank you” from my doggie for taking such good care of him?  I chose to think so!

There is one more kind of trophy I have discovered. It’s the one we cannot see but can offer to one another to validate and celebrate one’s personal growth or victory. Just this past week I concluded a six week coaching course I conducted to an amazing group of women called “The Second Blossoming.” It was all about how to create authentic relationships and how personal growth takes place to empower women to focus and flourish during the second nine of their lives.  There was so much personal victory that took place with inner blossoms sprouting up all over the place!  Some of the women wanted to continue in another program to create and execute a more beautiful life, much like Mildred Karaman, who decided not to diminish as she walked down the back nine of her championship life, but to take the trophy. Another inspired thought hit me:  “Why stop with Mom? There have to be more women who want to take the trophy home—and some of them are in great need of help to do so.”

To empower other women to claim their highest victory, in honor of my mother, I am establishing the Mildred Karaman Scholarship Fund. The funding will be used to provide tuition assistance to women who are in need of a fresh start to enroll in The Second Blossoming program.

Please join me for our first “women empowering women” golf clinic at Longleaf Golf and Country Club on Sunday, September 21st from 3 to 5 pm.  All the proceeds from the clinic will go towards one worthy recipient to get a fresh start and take home the trophy!

Thank you Second Blossomers–Paula, Marilyn, Sue, Cynthia, Sofie, Penny, Lydia, and Kim– for all the inspiration!

Veronica Karaman is a golf professional and women’s empowerment coach. Contact her at veronica@truechampioncoaching.com to register for the upcoming golf clinic for women.