My reflections on creating an Ideal Performance State through worship from my recent tournament victory. I hope this encourages you and informs you. 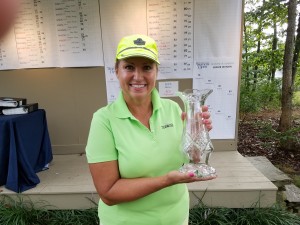 If you have not heard by now, I won the Tennessee Senior Women’s Open by a resounding 13 shots!  I played brilliantly, if I don’t mind saying so, shooting an even par 72 in very rainy conditions all day long.

Today I visited a new friend’s church in Raleigh whom I met while at The Messenger Cup in Colorado Springs two weeks ago, Pastor Lynton Turkington. He honored me in front of the entire church, telling of how we met and how I was an answer to his prayer for help with his chipping that day!  He had me stand up and lift my trophy before the entire congregation who cheered me on and shared in my victory!  That was so great—to bring my victory into the Body of Christ and make it theirs as well as mine!

It was marvelous to experience the fruit of worship in competition. Here is what I discovered:

We worship God when we play out of our true IDENTITY in Christ.

I would love to hear from you!