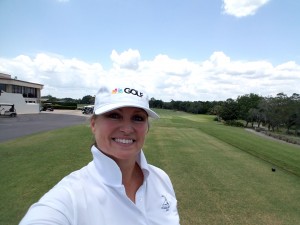 Today was a day of things disappearing!  I fully prepared everything I needed to play the first day of my mini-tour event until I stepped up to the first tee.  I realized that I left my range finder somewhere on the driving range of another golf course!  I had to walk all the yardages off old school—which were not as accurate, especially into the wind, as my range finder is!

Then my swing disappeared!  I wanted to use this tournament to “locate myself” with all the new swing changes I have been making.  I wanted to know how it would hold up under pressure. My swing was great on the practice tee, but the young tweety-birds I was playing with hit the ball hard and fast.  In order for me to hit it well, I have to hit it hard and slow.  Fortunately, I was able to discern how to recapture my “disappearing swing,” and hit it great again on the practice tee after my round.  I will do better tomorrow because now I know better.

During the course of my round, I then hit a shot in a sand trap. No matter how much we looked for it, we could not find it.  There was not even a trace of where it went into the trap. It just disappeared!  Yikes!

The biggest disappearance was the professional atmosphere which I invested $600 in to enjoy in this event.  One of the girls’ father was caddying for her and thought this was a good day to interject his rather boisterous comments into the round, disturbing my play, and turning a professional experience into a strange kind of social one. I had to stop numerous times to address the fly in the ointment.

In the midst of a day of disappearances, a few things appeared and rather noticeably at that.  Upon learning that my goal was to play in this year’s Senior Women’s U.S. Open, my playing partner spoke something beautiful and totally sincere into my life.  In a moment of reflection and clarity, she said, “I can see you playing in that.”  She saw the champion in me and spoke to it.  I can’t begin to tell you how much that meant to me in the middle of shooting a round in the “not so low eighties”!

The father of the other player came marching over to me after the round exclaiming, “You are one class act. The way you handled the other father was truly impressive.”  I was stunned–and blessed that he saw something standout in me despite my poor score.

While my range finder, lost ball in in the sand, professional atmosphere and swing disappeared, I was blessed with the evidence of my character and champion spirit showing up in full display.

Capturing that inner win–along with the re-appearance of my swing after the round—gave me a reassurance that tomorrow will be better–and hopefully, a lower score will appear as well!