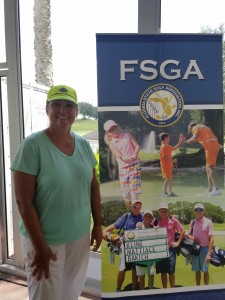 Let’s face it.  Some golf courses are plain stupid!  I played one this past weekend in the Florida Senior Women’s Open—Reunion Resort.  The course is nothing like its name.  The last thing I want to do is have a reunion with this jacked up track.

The first day I hit a great drive down the right center of the fairway.  My ball ended up in an unseen waster bunker right in the middle of a big tire track.  After taking a free drop, the ball plugged in the sand.  Double bogie.   A few holes later, I hit it right down the center of the fairway and ended up on an uphill-side hill lie.  I had to hit a wood off of that kind of nearly impossible unfair lie.  A few holes later I hit a great shot.  The ball skipped over the green up on top of what seemed like a goat hill.  I might as well have been a goat because I had to almost get down on my knees to hit the ball off that crazy lie.

If I didn’t know better, I would say some Disney imagineer designed that golf course.  It was the most contrived resort course I have ever played.  The terrain looked like it had a bad case of the mumps, or at least a severe case of acne.  I wanted to call the superintendent of golf course dermatology, but I don’t think he was in.

I would have enjoyed the course much better if they had put in little statutes of Mickey Mouse for tee markers and installed a mini-roller coaster between the front and back nines. At least that would have been more consistent with my experience. Certainly, it would have been more fun.  To top it off, I think having a great big waterfall on about the twelveth hole would have provided some much needed relief from the 107 degree heat.  The highlight of the tournament for me was standing under a big sprinkler on a back nine green and getting soaking wet.  Now that was a truly pleasurable experience.

About the greens: I consider myself to be a great putter.  However,  I could not read these greens.  Just when I thought the break would go to the left, it went to the right.  Just when I thought I had the speed of the greens down, the pace would shift.  UGH!  I actually got the ball closer to the hole when I had to chip or pitch the ball at times than when I putted it.

It is very difficult to play a golf course well when you don’t like it.  I work hard at not creating any kind of internal resistance to anything when I play because that creates an obstacle in your mind.  Then you have created an unnecessary challenge for yourself that you have to overcome—one you don’t need.  Perhaps the real mumps were in my own mind.  Hey maybe there is more truth to that than I am willing to admit.

For instance, I rented an Airbnb room to be closer to the resort.  When the owner of the home came out to meet me, he was carrying a big iridescent ball over his head.  “What the heck is he doing?” I thought.  As he reached out his hand to shake mine, I couldn’t help but think, “Is that a crystal ball he is holding?”  My mind graduated into “mump thinking”:  “Is this guy into some kind of crystal balls?  Is he casting a spell on me?  Is he cursing me because he found out I am a believer and he is in the occult?”  I started to Google crystal balls to find out what he could possibly be doing.

A couple of days later, I was talking to his mom.  She said to me in passing, “Ever since my son came to Florida, he has been fascinated with juggling.  In fact, Disney has called him to interview him.  We are hoping they will give him an opportunity to develop his new –found talent.”  I slid in my seat.  At least I didn’t let my imagination wander out-loud.  Whew!  I was glad I was no longer under an imaginary spell of my own making.

Apparently the golf course didn’t bother some of the players.  The winner of the overall tournament shot a 63 in one round.  Guess she likes Mickey Mouse.  I didn’t fair too badly, finishing fourth in the money and sixth overall in the Senior Division, shooting 3 rounds in the upper 70’s.

Maybe I will take a few bucks out of my winnings and go visit Disneyworld.  I won’t have to sink any weird putts or hang from any stupid lies in the middle of the fairway.  I may still need that sprinkler, however.  At least I will enjoy some real imagination worth enjoying.