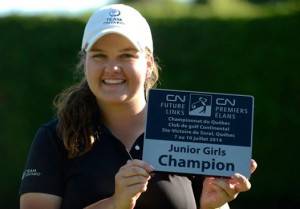 With the thrill of the Opens now almost at a bygone simmer, I wonder what will forever remain etched in my memory upon reflection of the event as time moves on.  You see, winners come and go.  I found it amazing that Kaymer who won by an amazing ten shots failed to make the cut in his next tournament.  Wie bowed to Lewis who seized backed her champion position in her next event.  Isn’t it the nature of the game that what brings a thrill in one moment vanishes into the parched brown fairway to wither away in sports history oblivion in the next.

Every now and then, however, I meet a true champion, someone whose impact upon my life never fades away, even years after meeting that person. A true champion is someone who impresses you more about who they are than about what they score.  I met such a person in ten year old Alyssa Getty.

I first met Alyssa and her mother Michelle at Whispering Pines Country Club many years ago.  They were here for the U.S. Kids Championship and attended a True Champion workshop I was conducting at the time.  Afterwards, Alyssa’s mom was eager for me to coach Alyssa in the principles of peak performance, so we went to work right away.

During the course of our initial coaching conversation, it was evident that ten year old, Alyssa, was an independent thinker.  I only asked her mom to chime in if she could not answer a question.  As I moved through my process of inquiry as to how I could help her become fully engaged in her preparation and play, some things became clear.  “I get tired after 16 holes, lose focus and have trouble finishing,” she said.  Discovering she did not like to drink water on the course, I talked about the importance of hydration and nutrition for endurance.

Even with fixing the endurance issue nutritionally, I had to get her to re-engage mentally and emotionally.  “What’s your higher purpose for playing?”  I asked.  “Nobody ever asked me that question before,” she replied.  “That’s because it’s a spiritual question and not many people address the spiritual component to performance,” I explained.

Not knowing how to play with a higher purpose, I offered a suggestion.  “One of the ways you can play with a higher purpose is to play in honor of someone.”  She thought for a moment and said, “My grandmother has cancer. I will do birdies for Grandma!”  She looked at her mom and they both smiled. “Great!” I replied.  “You are going to dedicate holes 17 and 18 in particular to making birdies for Grandma.  That way you will be very intentional about remaining focused for the whole round.”

“Now what is your overall goal for the championship?” “I want to finish in the top ten!” she exclaimed.  “You can do that and more,” I affirmed, as we marched off to the chipping green to expand her repertoire of chip shots.  I could tell just by the way she walked and the confidence she exuded that she was a champion.

I did not have to tell her twice what to do or think.  She immediately put into practice what we talked about, and even wrote it down on index cards to remind herself what her inner focus was during both her practice and competitive rounds.

It was thrilling to see Alyssa birdie holes 17 and 18 for Grandma and finish 6th in the championship!

Three years later, at 13, she qualified for the Canadian Women’s Open, the equivalent of our national Open.  Her grandfather died that week.  Instead of being devastated, and becoming disengaged, guess what she did?  Birdies for Grandpa!  At 13, Alyssa finished in the top 50 in her country’s national championship.

She so internalized the true champion process that in the moment of a life crisis, she fully engaged her spirit to create a peak performance.

Her legacy lives on, forever etched in my memory, of a remarkable young girl, now a young woman, who just won another junior championship in Canada.  Alyssa is a great player who has learned to score on the course and in the bigger game of life.  Now that’s a true champion!